CALL US FIND US

When you are looking at purchasing a RAM truck, you should compare the 1500 with the 2500. There are advantages and disadvantages to each one, so here is more information about them to help you decide what’s the best truck for your lifestyle. 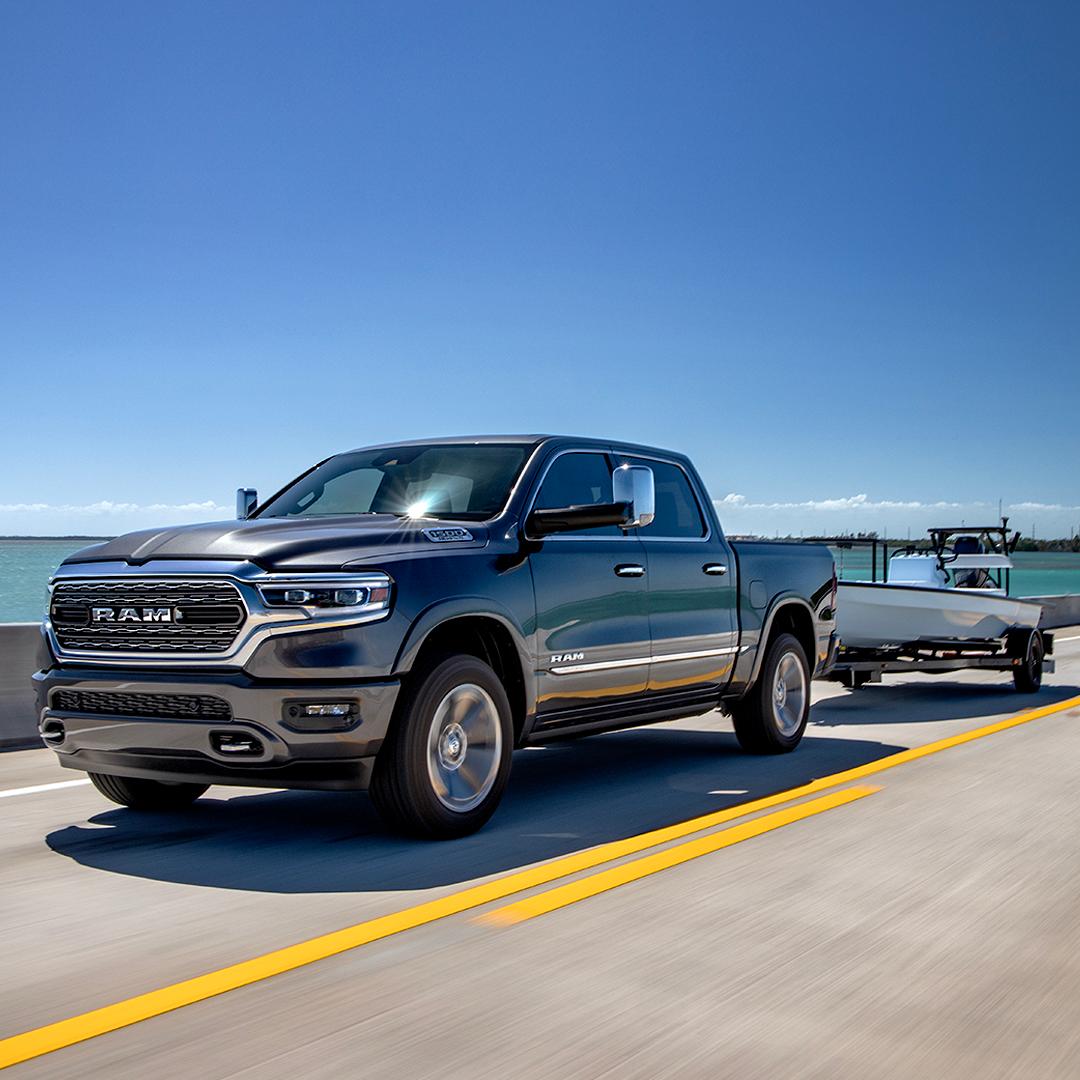 First- let’s talk about the RAM 1500 and all of its features. Full-size light-duty pickups, like the Ram 1500, are among the most competitive group of vehicles on the new-car market. Engine choices include a powerful base V6 and two potent V8s. The base 3.6-liter V6 makes 305 horsepower, while the available 5.7-liter Hemi V8 makes 395 hp. No matter the engine selected, power is sent through an 8-speed automatic transmission. Power is sent to the rear wheels or available 4-wheel drive (4WD) with low range. The diesel engine features a brand new turbocharger, redesigned cylinder heads, new fuel injectors, and new aluminum-alloy pistons. This is all in pursuit of an engine that will be more efficient and more powerful. This diesel V6 puts out 260 hp and an impressive 480 lb-ft. As of this writing, EPA fuel-economy estimates for the Ram 1500 have not been released. The Ram 1500 is available in a wide variety of trims, from the worksite-ready Tradesman to the luxurious Laramie and Limited trims. The available Rebel trim boasts an aggressive appearance, while the Longhorn includes western-inspired touches. The Ram 1500 has one of the most comfortable and tech-laden interiors in the full-size truck segment. It comes standard with the Uconnect touchscreen infotainment system, complete with Apple CarPlay and Android Auto. Buyers can also select an upgraded Uconnect system with a massive 12-inch vertical touchscreen, much like the center console found in a Tesla Model S. Other available features include leather upholstery, heated and cooled seats, wireless-device charging, and a Harman Kardon stereo system. The Ram 1500 provides a ride like no other truck in the segment, thanks to the class-exclusive link-coil rear suspension and available four-corner air suspension. This system delivers a comfortable ride and can extend the ride height for driving off-road, as well as lower on the highway for improved stability and aerodynamics. The Ram 1500 is available with a host of advanced safety technologies, including forward-collision warning and avoidance, adaptive cruise control, a 360-degree camera, blind-spot monitoring, front and rear parking sensors, and automatic high beams. The 2020 Ram 1500 will go on sale in the fourth quarter of 2019. 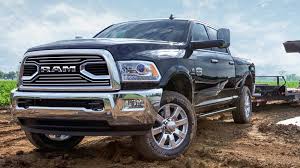 Earlier in the 2019 model year, Ram released its redesigned 1500 pickup truck. In keeping with tradition, the brand also chose 2019 to release a new 2500. The Ram 2500 competes with other three-quarter-ton pickup trucks like the Chevrolet Silverado 2500 HD, Ford F-250 Super Duty, and GMC Sierra 2500 HD. This new 2500 uses the same basic body shell that it did in years prior, but adopts the fresher styling of its baby brother. Like that truck, the 2500’s front end no longer includes the famed crosshair grille. In its stead is one of several giant designs that spells out R-A-M in large block letters. However, the 2500 does retain the power bulge on its hood, which is now made of weight-saving aluminum. At the rear end, redesigned lights give the truck a fresh, modern look. But despite the similarity in profile, the new 2500 includes a litany of improvements, including increased spot welds for a stiffer and stronger frame, new high-strength grades of steel, and a frame redesigned for strength and lightness. The 2019 2500 sheds as many as 143 pounds versus last year’s model, depending on the configuration.

Step into the 2500’s interior and you’ll find it to be fresher than ever. It borrows heavily from the modern and upscale setup in the new 1500. Masculine, chiseled shapes make up the entirety of the dashboard. There’s a revised instrument cluster capable of displaying 3D animation on a 7-inch LCD and a new rotary gear selector that smartly groups drivetrain features like hill-descent control, axle-lock, and transfer-case controls. For true power users, the 2500 offers Ram’s 12-inch portrait-oriented touchscreen, which can display one application across the entire screen or be split into upper and lower zones. The new center console features five USB ports and more space, increasing from 19.7 to 22.6 liters. But Ram didn’t just focus on utility here; you’ll also find the new 2500 to be more civilized, thanks to active noise cancellation and acoustic glass that lower ambient cabin sounds by about 10 decibels. The revised climate control system supplies more air and produces less noise than before, and the diesel trims get heating elements for faster cabin warm-up.

The new entry-level engine for the 2500 is the carryover 6.4-liter Hemi V8, making the same 410 horsepower and 429 pound-feet of torque as before, paired with a new 8-speed automatic transmission. Those with even greater demands can specify the optional 6.7-liter turbo-diesel inline 6-cylinder engine. It carries over from last year’s model, but it gets incremental improvements and weighs 60 pounds less than the one in the old 2500. It puts out 370 hp and 850 lb-ft, the latter an increase of 50. You’ll also get an updated version of last year’s 6-speed automatic transmission. Both engines come with standard rear-wheel drive (RWD) or optional 4-wheel drive (4WD). While payload and towing capacities aren’t yet available, Ram says you can expect improvements including revised and uprated brakes, a redesigned coil-sprung suspension system with frequency response damping, and a new optional rear air suspension with Bed Lowering, Normal/Payload, and Trailer-Tow modes.

The 2500’s feature lists were given a similar overhaul for 2019. Keyless start now comes standard on all trims. In addition to the premium 12-inch infotainment system, there’s a standard 5-inch and optional 8.4-inch unit; the latter includes Apple CarPlay and Android Auto. You can also pick from three headlight variations: halogen, full-LED, and full-LED adaptive projector beams. The 2500 even spoils you for choice in the audio category, with four different sound systems, including a 750-watt Harman Kardon setup with 17 speakers. And of course, the brand’s intuitive RamBox cargo management system returns, now sporting a 115-volt outlet with up to 400 watts of power.

Ram didn’t leave safety untouched either. The tire pressure monitoring system now includes the ability to monitor up to 12 trailer tires, in addition to the vehicle’s four, while a new cargo-view camera supplements the standard reversing camera. Apart from those, automatic emergency braking and a 360-degree camera system are features that make the list.

The three-quarter-ton pickup market is as competitive as ever, but it’s fair to say that Ram brought its A-game with this new 2019 2500. The new look gives it a handsome profile, and the increased levels of comfort and functionality are set to impress. Look for it on dealer lots later this year. 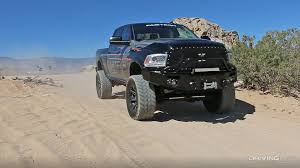 There are several items to look at when talking about the overall price of the two vehicles. When looking at the MSRP, the RAM 1500 is more affordable than the RAM 2500. However, they both have the same basic warranty which is three years and 36,000 miles. This means you can count on both trucks to last an equivalent amount of time. If something goes awry, you’ll be covered under the warranty so whatever the issue is can be fixed.

The basic RAM 1500 and RAM 2500 models have about the same amount of headroom and legroom. However, tall buyers have the option to purchase the RAM 1500 extended cab for increased space and comfort for those long drives. The RAM 1500 is wider when compared to the RAM 2500. Keep in mind that finding a parking spot to accommodate a broader truck can be time-consuming.

You will be comfortable in the RAM 2500 no matter where you are going, as it has leather seats throughout. There is also a 15-inch center console that can fit a laptop safely, as well as a large tablet and cell phone docking station. Wireless charging is another option that is available.

The RAM 1500 has a 12-inch touch screen, which is the largest in its class. It allows you to split the screen to see two different features at the same time. There is also pinch and zoom technology if you need to focus in on something more closely. The navigation system keeps you on track, so you will always know the best route to your destination.

The RAM 2500 has more torque than the RAM 1500, giving it a more powerful and quicker feel. It also has a larger turning radius, which means it might be a challenge turning out of tight spots. 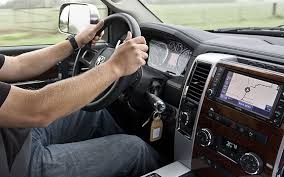 If you want to see the 2019 RAM 1500 or 2500 in person, visit our dealership at Bayshore Chrysler Dodge Jeep RAM. We will help answer any questions you have about them so you can decide which truck is right for you. We’ll even let you test drive them. 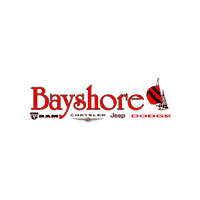